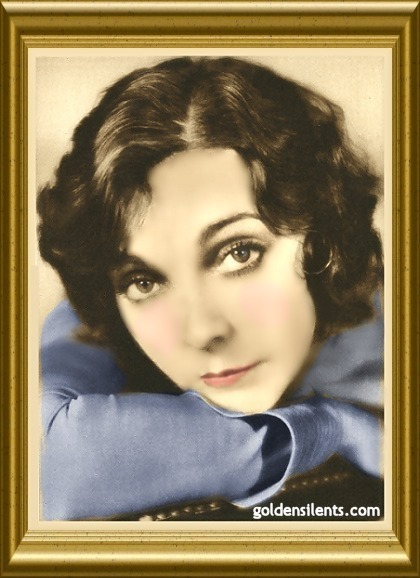 “I was what they called a feature player, never a star. They say I was in 500 films, everything but the newsreels.” – ZaSu Pitts

The character actress ZaSu Pitts was born in Parsons, Kansas on January 3rd, 1894. Her first name ZaSu was derived from a combination of names of two of her aunts on her father’s side, Eliza and Susan. ZaSu received her education in Santa Cruz, California. She worked for many studios, including Universal, Metro, and Famous Players-Lasky, appearing in many of their features and comedies. Some films of note for ZaSu were 1917’s “The Little Princess” and “Rebecca Of Sunnybrook Farm”, both opposite Mary Pickford, “A Modern Musketeer” (1917), and “How Could You, Jean?” (1918) for Famous Players, as well as “As The Sun Went Down” (1919), for the Metro Company. She also appeared in popular films for Robertson-Cole, including “The Other Half” and “Poor Relations” (both 1919). ZaSu’s most famous silent role however remains her portrayal of Trina Sieppe, the greedy wife in the Erich von Stroheim classic silent “Greed” (1924). Her performance was haunting and spellbinding. ZaSu also filmed the part of the mother in the anti-war film classic “All Quiet On The Western Front” (1930), but after audiences laughed in preview at the sight of her on screen, the film was revamped, and her scenes played by Beryl Mercer instead. From that time on ZaSu was cast in mostly comedic roles for the remainder of her film career. In real life she looked physically similar to actress Lillian Gish, but her personality was much quirkier. 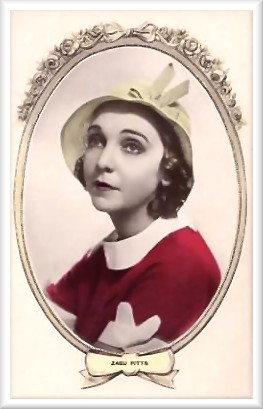 ZaSu was married twice, the first time to actor Tom Gallery, from 1920 to 1932. They had a daughter together. ZaSu then married John Woodall in 1933, a marriage that lasted until her death in 1963. One of ZaSu’s closest friends in Hollywood had been the actress Barbara La Marr, and when Barbara died tragically at only 29 years of age, ZaSu adopted her son Marvin in 1926, and raised him as her own. ZaSu made the transition to sound very well, appearing in films from the 1930’s through the 1950’s, and even did some television appearances in series and specials, while still finding time to appear on the stage as well. She loved candy, and published her own recipe book in 1964 called “Candy Hits”, detailing how to make chocolates and other sweets at home. A prolific and interesting acting career was halted when ZaSu Pitts died from cancer on June 7th, 1963, in Hollywood, California. ~ Copyright © 2004 www.goldensilents.com

Vintage Bio from “Who’s Who On The Screen” (1920): “ZaSu Pitts, known as “the girl with the ginger snap name” was born in Parsons, Kansas, and received her education in Santa Cruz, California. She embarked upon a screen career with Universal, appearing in many of their comedies. ZaSu Pitts, as befits her splendid work on the silver sheet, is now being starred by Robertson-Cole and the reception her pictures “The Other Half” and “Poor Relations” have received prove her popularity. She is fond of tennis and motoring, is five feet six inches high, weighs a hundred and fifteen pounds, and has blue eyes and brown hair.”