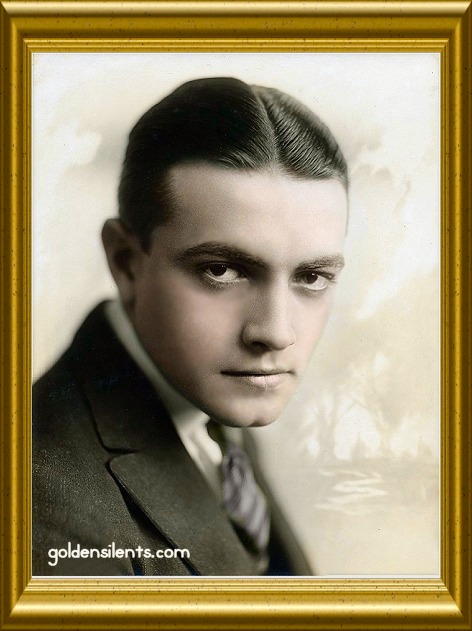 Richard Barthelmess was rumored to have been “discovered” by the actress Alla Nazimova, but it is much more likely that Richard (or “Dick” as he preferred to be called) discovered himself somewhere along the Thespian Road to success. He was a phenomenal acting talent, extremely popular in his day, though comparatively few people remember him today. Lillian Gish thought that Richard’s face was the most beautiful of any man who had ever been before the camera. D.W. Griffith thought that Richard made the perfect hero, and starred him in his memorable silent film features “Broken Blossoms” (1919) and “Way Down East” (1920), among others. Once you are familiar with Richard Barthelmess’s work on screen, you are bound to agree that few male actors could compare with him, then or now. He did indeed have a beautiful, expressive face, which came alive when the camera zoomed in on him. 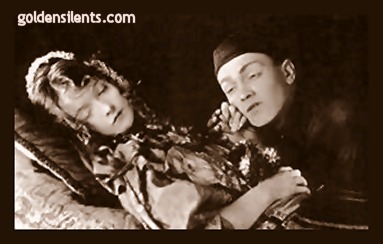 Lillian Gish and Richard Barthelmess in the heartbreaking “Broken Blossoms” (1919);
in my opinion Richard gave the most compelling performance of the silent era in this film.

Richard Barthelmess was born in New York City on May 9th, 1895, and started acting in amateur theater productions while attending Trinity College in Hartford, Connecticut. Beginning his film career with the popular “War Brides” (1916), with Nazimova, Richard was immensely popular throughout the silent film era. One of his best known silent movies was the poetical and lovely “Tol’able David” (1921), which many consider to be a screen classic. In that year he formed his own production company, the Inspiration Film Company. He was nominated for an Academy Award in the first year that the Oscars were given out, 1927, for his work in two films: “The Patent Leather Kid” (1927), and “The Noose” (1928). Unlike many silent film actors, Richard had a pretty decent career in “talkies” through the early to mid 1930’s, then roles began to dry up for him as he got older and younger actors took his place as leading man. Some notable sound films for Richard were “The Dawn Patrol” (1930), “The Last Flight” (1931), “Cabin In The Cotton” (1932) with Bette Davis, “Central Airport” (1933) and “Heroes for Sale” (1933), two powerful pre-code dramas, and “Midnight Alibi” (1934). His last best film was “Only Angels Have Wings” (1939).

Richard married twice, to actress Mary Hay, from 1920 to 1927, a marriage which ended in divorce, and then to Jessica Sargent in 1928, a marriage that lasted until his death in 1963. He had a daughter, Mary, with his first wife, and a stepson, Stuart, he adopted from his second marriage to Jessica. To see a family portrait, please click HERE. Dick retired from the screen in 1942, joining the Naval Reserves and fighting in the war. After World War Two ended, he retired to Long Island, and lived off his many investments. Richard Barthelmess died of throat cancer on August 17th, 1963, in Southhampton, Long Island, New York. He is buried in Westchester, N.Y.

Vintage Bio From “Who’s Who On The Screen” (1920): “Richard Semler Barthelmess was born in New York City in 1895 and is a graduate of Trinity College of Hartford, Conn. Mr. Barthelmess made his first screen appearance in the Herbert Brennon production of “War Brides”, after which he joined the Famous Players forces, appearing with Marguerite Clark in “Bab’s Burglar.” “Bab’s Diary”, “Rich Man, Poor Man” and “Three Men and a Girl.” He is the creator of one of the greatest roles ever seen on the screen – that of the China man in D.W. Griffith’s masterpiece “Broken Blossoms.” He has also appeared with Dorothy Gish in “Peppy Polly” and “I’ll Get Him Yet.” Richard Barthelmess is five feet seven inches high, weighs a hundred and thirty-five pounds, and has dark brown hair and eyes. He is a Griffith Player and the husband of Mary Hay of the same company.” Richard Barthelmess gets in close for a clinch to Betty Compson in “Weary River” (1929),
a silent film with some talking sequences and musical soundtrack 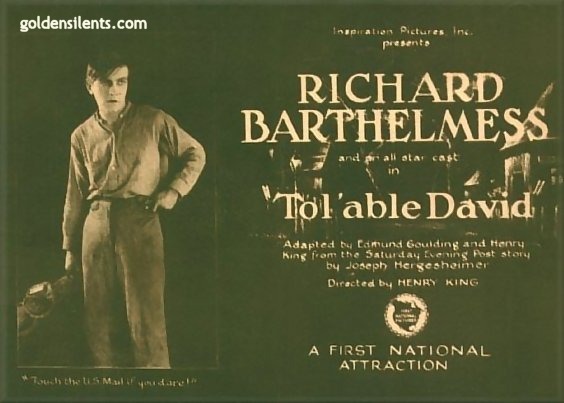