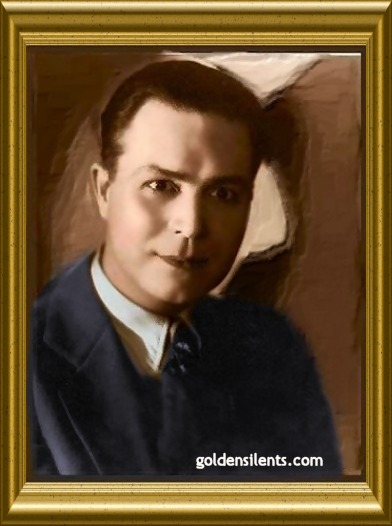 My personal all time favorite silent movie star, a wonderful, class act, with his sparkling eyes and impish smile, Harrison Ford was born in Kansas City, Missouri, on March 16th, 1884. Apparently never finishing school, Harrison embarked on a theatrical career while still in his teens, playing in various theater circuits on the East coast, treading the boards in stock to learn his craft, until finally making it to the Broadway stage. After playing in “Strongheart” on Broadway, Harrison became interested in silent film acting and pantomime. He moved to Hollywood in 1915, and eventually became affiliated with the Famous Players-Lasky Corporation, playing bit parts until making his first notable appearance with Fanny Ward in “The Crystal Gazer” (1917). Harrison followed that film with several fun and romantic comedies, happily playing opposite the perky Constance Talmadge, with whom he had an excellent rapport. Harrison appeared with many of the great stars of the silent era, including Wallace Reid, Norma Talmadge, Clara Bow, Marie Prevost, Marion Davies, and Gloria Swanson. Several special films of note for Harrison were “A Pair of Silk Stockings” (1918), “Shadows” (1922) opposite Lon Chaney, “Foolish Wives” (1922), “The Primitive Lover” (1922), “Smilin’ Through” (1922), “Vanity Fair” (1923), “Little Old New York” (1923), “Janice Meredith” (1924), “Up in Mabel’s Room” (1926), “Rubber Tires” (1927), “Let ‘Er Go, Gallegher” (1928), and “Blonde For A Night” (1928). When sound arrived to films, Harrison made a few pictures, then retired from the screen in 1934 to concentrate on his first love, stage acting. He travelled to London to appear on stage there, then returned to the West Coast of the U.S. At the Pasadena Playhouse he appeared with the Henry Duffy Company. During World War Two, he toured for the U.S.O. He also directed productions at the Little Theater of the Verdugos, in Glendale, CA.

According to the IMD, Harrison Ford was married once, to Beatrice Prentice, an actress, however I have never been able to find any other source to corroborate this tidbit of information. Harrison was a private man, shunning publicity. He continued to work as an actor on stage until 1951, when he was hit by a car near his home in Glendale, California. The Los Angeles Times, Friday, September 14th, confirmed that, “Silent star Harrison Ford was injured critically yesterday when struck by an automobile at Canada Boulevard and El Rito Street, Glendale. He was taken to the Physicians’ and Surgeons’ Hospital, unconscious with a brain concussion and fractured ankle. The accident occurred near his home at 2400 Canada Boulevard, where has has lived for ten years. The car which hit him was driven by Mrs. Margaret Schachner, 33, of 1700 Paloma Street, Glendale.” This modest actor and devoted lover of books and the theater suffered for six agonizing years, never recovered fully from his injuries. His Variety obituary was short: “Harrison Ford, 72, silent picture leading man, died Monday, December 2, 1957, at Motion Picture Country Hospital as a result of an accident suffered in 1951. Services are private.” No survivors were listed, and a short paragraph summed up his career. Harrison Ford was buried in Forest Lawn, Glendale, California.

If your spirits need lifting, and you enjoy oldtime films that make you laugh, try some of Harrison’s surviving silent films; you’ll love them. ~ Copyright © 2004 www.goldensilents.com 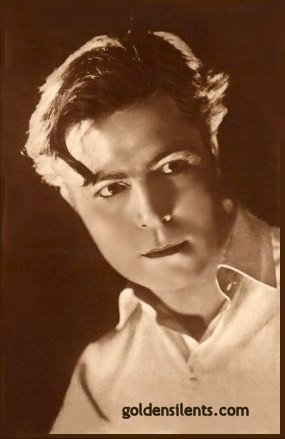 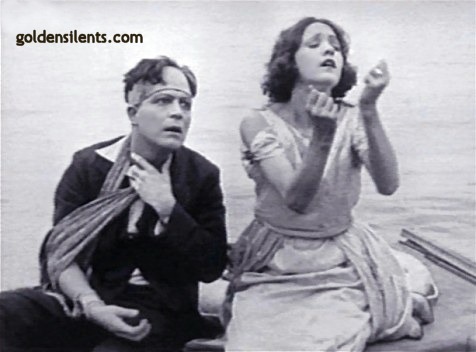 Harrison Ford and Connie Talmadge, on the life raft of her character’s
dreams, in the 1922 romantic comedy “The Primitive Lover” 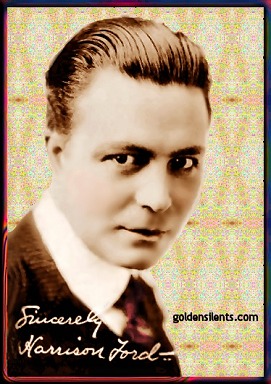