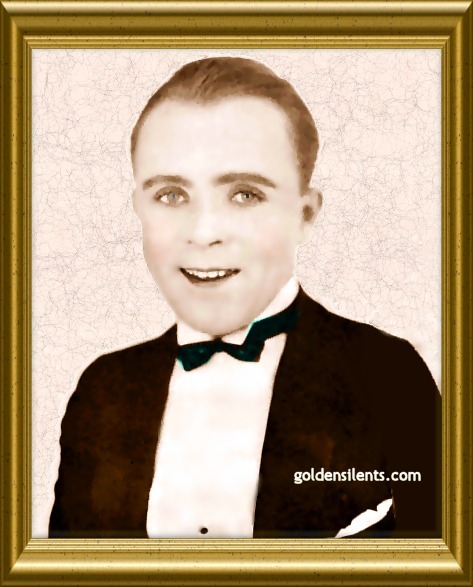 Popular silent film actor Bobby (sometimes spelled “Bobbie”) Vernon was born Sylvion de Jardin in Chicago, Illinois on March 9th, 1897, to actor Harry Burns and actress Dorothy Vernon, and moved at an early age with his family to San Francisco, California, where he grew up attending public school and delivering newspapers to earn extra income. Due to his parents’ influence Bobby grew up loving the theater and he appeared for a few years on the stage with Kolb and Dill in musical comedies on the road, and took German comedian Max Dill’s place as the lead when he broke his leg while appearing in “The Rollicking Girl” at the Gaiety Theater, San Francisco. Bobby moved to Long Beach, California in 1913, and began his film career as an extra and in minor roles for studios like Universal, and for Mack Sennett’s Keystone, playing comic parts and old men with wigs, including a stint playing Louise Fazenda’s father. This must have looked very odd, considering Bobby was only in his early twenties at the time. He occasionally played female impersonator roles. It wasn’t until Bobby was hired by producer Al Christie that his career took off. Bobby often played innocent country boy roles, which America loved at that time, with title names like “Petticoats and Pants” (1920), “Hey, Rube!” (1922), and “A Hickory Hick” (1923). (How times have changed.)

Bobby joined the Navy for a time during World War One, then came back to pick up his film career again. He married and had a daughter named Barbara Dorothy Vernon. His acting career died out when the sound era began. He made a handful of early talkies and then retired from the screen to be a writer and comedy supervisor at Paramount Studios, for actors such as W.C. Fields and Bing Crosby. Bobby Vernon died prematurely of a sudden heart attack, on June 28th, 1939 in Hollywood, California. He was only forty-two years old.

Vintage Bio from “Who’s Who On The Screen” (1920): “Sylvion de Jardiens was too long a name for Bobbie Vernon, so they called him Bobbie around the theater when he began understudying musical comedy stars and doing bits on the stage. Bobbie is a product of Long Beach, California and was a newsboy of no mean ability before he got into the movies in a black face bit with Fatty Arbuckle. Now he is featured in Christie Comedies and he has become a veritable matinee idol. Bobbie is popular with all the children and dogs about the Christie studios in Hollywood and is hailed affectionately from all sides simply by the name of “Bobbie.” He has pleasant blue eyes, medium brown hair, weighs a hundred and thirty-five pounds and reaches the boyish height of five feet two inches.”