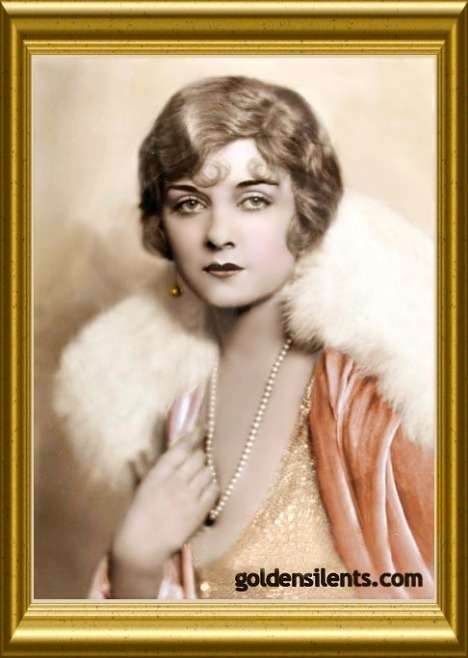 Alice Terry was one of the premiere actresses of the silent screen, her patrician blonde beauty forming a stunning contrast with the leading Latin lovers of the day: Valentino, Novarro, and Moreno. And she was really a redhead! Her trademark curly blonde hair came to be her trademark quite by accident.

Alice was born Alice Frances Taaffe on July 24, 1899, in Vincennes, Indiana. Her family moved from Indiana to Los Angeles when she was 15, and she began to work in the industry as an extra and film editor. In one of her first roles, Civilization (1916), she appeared in several roles, playing everything from a peasant to a German soldier. However, she didn’t have much success, and her confidence was nil until she met handsome Irish director Reginald Ingram Montgomery Hitchcock (Rex Ingram) on the set of a movie in 1917.

While preparing for a movie, Alice happened to see a blonde wig lying about, and on a whim put it on. Rex thought she photographed so well with it that she continued to wear it for the rest of her career. They became great friends; eventually marrying in 1921. It was also this year that saw Alices first critical praise as Marguerite Laurier opposite Rudolph Valentino in The Four Horsemen of the Apocalypse. This movie would put the little known Italian actor on the map as well. Alice would make another movie with Rudy the same year, The Conquering Power. This film did not show the same visual artistry as the former, but Alice again turned in a restrained, but eloquent performance as Eugenie Grandet.

In The Prisoner of Zenda (1922) and Scaramouche (1923), she played opposite a new costar, Ramon Novarro, who became her favorite leading man. Rex thought Ramon could easily usurp Valentinos place as the current Latin heartthrob, but it didn’t happen. However, he and Alice ended up appearing in five films together, and becoming good friends.

In 1925, Ingram acquired the Victorine Studios in Nice, France, and the couple moved there and made several films on location in North Africa, Spain, and Italy for MGM and other studios. It was while there that Alice made her favorite film, Mare Nostrum (1926), playing the part of Freya Talberg, opposite Antonio Moreno. This is perhaps her best performance, allowing her to express a broad range of emotions, and the location shooting in Barcelona, Pompeii, and Paestum, as well as Nice, gave an authentic feel to the story of a beautiful spy working for the Germans during the first World War.

Alice Terry with Iván Petrovich in “The Garden of Allah” (1927)

Another Rex Ingram silent film of note for Alice was “The Garden of Allah” (1927), which still exists (TCM has a copy in 35 mm and needs to get it scored and broadcast it), and was remade in the 1930’s with Marlene Dietrich. There were times when Alice acted as co-director on her husband’s films, and she was credited on Baroud (1933), and uncredited on Where the Pavement Ends (1923).

The arrival of sound films did not suit either of them very well; they lost their studio in Nice, and later returned to the U.S., where Ingram died in 1950. A year later, when Columbia released a movie about Valentino suggesting that an improper relationship existed between he and Alice, she filed a suit and won.

Alice passed away from pneumonia, at the home she shared with her elder sister, on December 22, 1987, thirty-seven years after she lost her husband and best friend Rex Ingram.

Alice Terry with Ramon Novarro, at the train station saying goodbye
before he traveled on location to make his sound film “Laughing Boy”.
Alice loved sweets and gained weight during the 1930’s, but as you
can see, she was still one magnificently beautiful woman! Who says
you have to be a stringbean to be beautiful? 🙂

To learn more about Alice Terry, visit her page on the Internet Movie Database

Back to Golden Silents