Adolphe Menjou was born to a French-American family in Pittsburgh, Pennsylvania on February 18th, 1890, and he graduated from a high school military academy and then Cornell University with an engineering degree. His father, a restauranteur, wanted Adolphe to continue in the family business, but a career in food did not interest him. His friends suggested he try some acting work and he enjoyed it, so he tried out for parts in vaudeville and film. Menjou found some bit parts in the fledgling film industry starting about 1912. After playing many supporting roles in silent movies, he took a break from his acting career to serve in the American Ambulance Corps during World War One. At the end of the war he went back to resurrect his screen career, and landed some starring parts in successful films, including the role of King Louis the Eighth in “The Three Musketeers” (1921) and the sophisticated French gentleman Pierre Revel in Charles Chaplin’s “A Woman Of Paris” (1923). From then on Menjou’s image and “type” before the cameras seldom changed. For the next forty years he appeared in more than 100 movies, as a dapper man-about-town, or as a world-weary fellow attempting to find consolation and peace through something – or someone – higher than himself. Adolphe was a convincing hurt and betrayed husband in Ernst Lubitsch’s first Paramount picture “The Marriage Circle” (1924). He made an excellent father figure to young Betty Bronson in “Are Parents People?” (1925), a quality that would also re-surface in a sound film made with Shirley Temple called “Little Miss Marker” (1934). Menjou possessed a rather cultured voice, so he had no problems transitioning to sound films. He made some notable talkies, including “Stage Door” (1937), “A Star Is Born” (1937), “State Of The Union” (1948), and the anti-war film “Paths Of Glory” (1957). His last film was with Hayley Mills, in “Pollyanna” (1960). Adolphe was married three times, divorced twice, and had an adopted son with his last wife, actress Verree Teasdale. In 1947 Adolphe Menjou testified in a closed door hearing before the U.S. Government’s House Committee on Un-American Activities. He was a fervent anti-communist and had no qualms in testifying about the communist infiltration of Hollywood. He wrote an autobiography in the 1940’s: “It Took Nine Tailors.” Adolphe Menjou died October 29th, 1963 from hepatitis. ~ Copyright © 2004 www.goldensilents.com

Vintage Bio from “Stars of the Photoplay” (1930): “Adolphe Menjou’s father, a restauranteur, hoped Adolphe would be the same. However, the only thing Adolphe ever has permitted to interfere with his screen career was the war, during which he served with the Cornell Unit of the American Ambulance Corps. It was in “A Woman Of Paris” which Charlie Chaplin directed, that Menjou came into his own. Born in Pittsburgh, PA, February 18, 1891, he is 5 feet, 10 and 1/2 inches tall, weighs 155, and has brown hair and blue eyes. Divorced from his first wife, he married Kathryn Carver.” 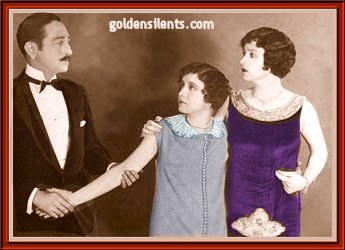 Adolphe Menjou with Betty Bronson and Florence Vidor in “Are Parents People?” (1925) 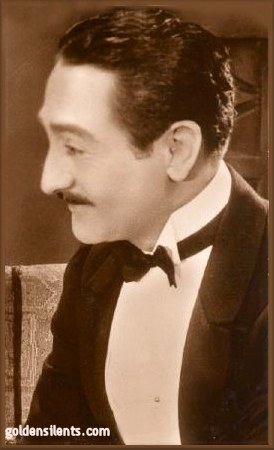