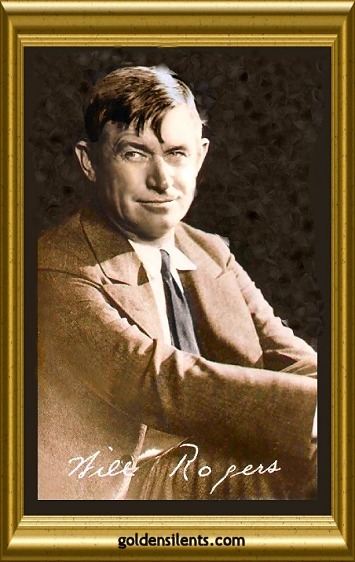 American humorist and movie actor Will Rogers was born William Penn Adair Rogers on November 4th, 1879 in Oologah, Indian Territory (now Oklahoma). He was part Cherokee Indian and he was raised to love the land and to work on it. He attended Kemper Military School and College in Boonville, Missouri. He began his show business career as a rope twirler and a trick horse rider in Wild West shows. He gradually added homespun humor to his act and his audiences loved the combination. Will went on to perform for the Ziegfeld Follies and in traveling vaudeville shows, and before he knew it he was a star across America. He also became a syndicated writer in 1922, with a weekly humor column which appeared in many newspapers, prompting fellow writer H.L. Mencken to call Will: “the most dangerous man alive,” due to the influence his rustic, charming and clever comments had on his adoring public. Will Rogers once visited President Warren Harding and said to him, “‘Morning, Mr. President! Would you like to hear the latest political jokes?” and Harding was said to have replied, “You don’t have to, Will. I appointed them.”

It was probably inevitable that Will Rogers’ performing abilities would attract the attention of silent film producers. In 1918 Rogers made his film debut in a Samuel Goldwyn movie, “Laughing Bill Hyde.” Goldwyn offered Will a contract and he appeared in thirteen features over the next three years, among them the successful “Jubilo” (1919), “Honest Hutch” (1920), the amusing “Doubling for Romeo” (1921), a Shakespearean parody, “The Ropin’ Fool” (1921) and a version of “The Headless Horseman” (1922). Will’s screen persona was simply his own common man, folksy personality coming to the forefront for the audience. He communicated his special brand of humor flawlessly through pantomime, despite the audience not being able to hear his voice during the silent era. After his Goldwyn contract expired Will decided to produce his own two-reel films, but his experiment was not a success, and he found himself deeply in debt. He signed with producer Hal Roach in 1923, and spent the next two years starring in successful films such as “Uncensored Movies” (1923) and “Big Moments From Little Pictures” (1924), both Hollywood spoofs. The coming of sound provided Will with his best film showcases, since the audience could finally hear his mid-Western accent and enjoy his humorous sayings. In 1929 he signed a contract with Fox and made some memorable “talking pictures” such as “They Had to See Paris” (1929), and the first version of “State Fair” (1933), opposite Janet Gaynor.

Will Rogers was married once, to Betty Blake, from 1908 until his death in 1935. The couple had four children, three boys and a girl. Two of their sons, Will Rogers Jr. and Jimmy Rogers, also became actors. Rogers published an autobiography in 1927 oddly titled “There’s Not A Bathing Suit In Russia.” Tragically, Will Rogers died in an airplane crash near Point Barrow, Alaska, on August 15th, 1935. The plane had been piloted by the world-renowned aviator Wiley Post, who was also a victim. Their bodies were recovered and transferred back to the mainland for burial. Will Rogers’ last two films were released the same year after his death. He was a man of his time, whose humor was timeless. ~ Copyright © 2004 www.goldensilents.com 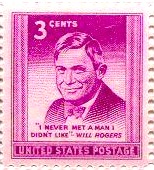 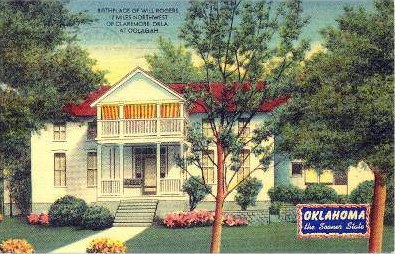