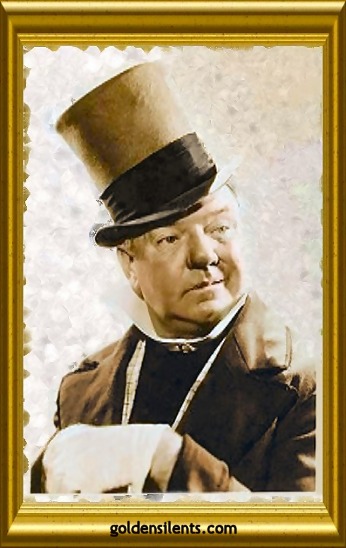 Born William Claude Dunkinfield in Philadelphia, Pennsylvania on January 29th, 1880, Fields had a tragic childhood. The son of a poor Cockney immigrant and an American mother, he ran away from home at the age of eleven due to abuse, surviving by his wits. He dreamed of being a great juggler and it was this skill that allowed him to break into show business. By the age of twenty he was a comic star in vaudeville, giving a command performance at Buckingham Palace in London while on a European tour. He starred at the Folies-Bergere along with Charles Chaplin and Maurice Chevalier. He had a string of successes in the Ziegfeld Follies and the George White Scandals from 1915 through 1921, and in 1923 he starred in the hit musical “Poppy” on Broadway, a show which was renamed later for the screen as “Sally of the Sawdust” (1925), directed by D.W. Griffith, and then remade once again in a 1936 sound picture, “Poppy” co-starring with the pretty ingenue Rochelle Hudson.

Fields’ first movie was made in 1915 for Mutual; he was thirty-six years old. He went on the work for Famous Players-Lasky (later Paramount Pictures) and also began writing his own screenplays. Near the end of his career he switched over to Universal. Most of Field’s films were “acquired tastes”, more often praised by the critics than favored by the public. However by the end of the silent era he had managed to achieve a sizable following of devoted fans. Many of his routines were improvised, which was often difficult for the other actors performing with him to follow. His characters were mostly cynics and misanthropes, persecuted by authority figures, and henpecked by critical wives. He would fight back by griping and bragging, avoiding reality, and speaking sarcastically to children and dogs. Fields was married once, to Harriet Hughes, from 1900 till his death from a stomach hemorrhage on December 25th, 1946 in Pasadena, California. Today he is mostly remembered for his sound pictures, like the classic 1935 version of Dickens’ “David Copperfield”, in which he played the feisty and good-natured (for a change) Mr. Micawber, and for his role opposite Mae West in “My Little Chickadee” (1940). W.C. Fields is perhaps more popular today then he was during the peak of his long and successful career in show business. ~ Copyright © 2004 www.goldensilents.com

To learn more about W.C. Fields visit his profile on The Internet Movie Database