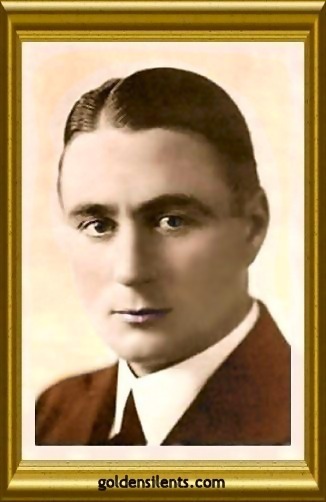 Sydney Chaplin, Charlie Chaplin’s older half brother, deserves a mention on www.goldensilents.com, for he was a pivotal influence in the success of his brother’s career and he also had a modicum of success as an actor in silent films himself. He was born Sydney Hawkes in Cape Town, South Africa on March 16th, 1885. It is quite possible Sydney was an illegitimate child, for there is no record of a marriage between Hannah his mother (who would have been around sixteen years old at the time of his birth) and a man named Hawkes, and Charles Chaplin does not mention Sydney’s father in his 1964 autobiography. However, when Hannah married Charles Chaplin Sr., Charlie Chaplin’s father, in London, England not too long after, Sydney’s name became Sydney John Chaplin legally.

Syd had the same Dickensian childhood as did Charlie, but being older when misfortune struck the family he was able to escape faster from the sad situation than little Charlie. He joined the navy as a young teen and worked upon a ship called the Exmouth, sending money back to Charlie and their mother to help make ends meet. When Syd returned home he found Charlie and his mother in dire circumstances. Hannah was committed to an asylum and the two brothers conspired to find a way out of their poverty. The theater was the logical choice. Syd helped Charlie prepare for success and helped him get his first roles in vaudeville; since Charlie could barely read Syd had to help him memorize his lines. Syd went on to work with the Fred Karno Company in London, and then moved to America and began his picture career as an actor with the Keystone Company, as did Charlie. While Charlie’s character was the famous “The Little Tramp”, Syd found moderate success of his own with a character he created called “Gussie.” When Charlie began to experience his phenomenal success in films Sydney dropped out of acting for awhile to become his brother’s manager, and he also worked as an actor in several of Charlie’s motion pictures, including “A Dog’s Life”, “Shoulder Arms” (both 1918) and “The Pilgrim” (1923). He received a contract with the Famous Players-Lasky Corporation to produce several films, and had a hit film himself as the lead in “Charley’s Aunt” (1925). He helped secure Charlie Chaplin’s lucrative contract with First National, which gave Charlie ownership of his own films, and he also helped form United Artists. Charles Chaplin always credited his brother Syd as the primary contributor to his professional success. Darryl F. Zanuck, who worked for Syd for several years in the 1920s, referred to Sydney as “the greatest ladies’ man in Hollywood history – better even than Errol Flynn.” It is unclear whether he ever married or had children. He died April 15th, 1965 in Nice, France. ~ Copyright © 2004 www.goldensilents.com 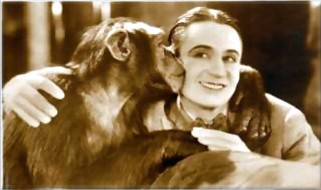 Sydney Chaplin was quite the ladies’ man, so this must be a female chimp, right? 😉 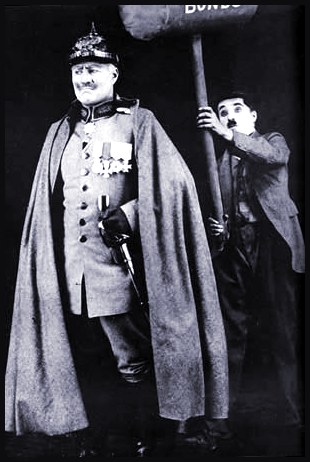 Syd Chaplin as the Kaiser, with his brother Charlie Chaplin in “Shoulder Arms” (1918)