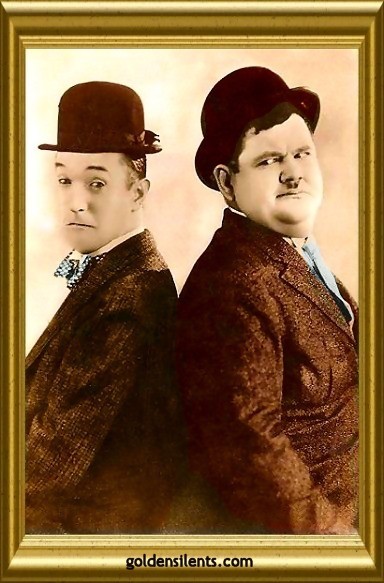 Although most often remembered today for their popular sound films made during the 1930’s, both Stan Laurel and Oliver Hardy as solo performers and as a team got their start in the silent film era, so both funny men are worth including in a www.goldensilents.com tribute. 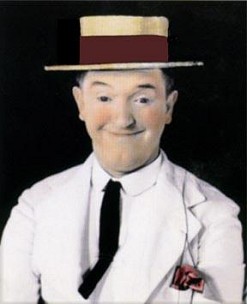 “If any of you cry at my funeral, I’ll never speak to you again!” – Stan Laurel

Stan Laurel was born Arthur Stanley Jefferson into a theatrical family in Ulverston, England June 16th, 1890, and was to become the chief gag devisor of the Laurel and Hardy film comedy team. He joined Fred Karno’s London music hall troupe in 1910, which also employed Charlie Chaplin. For a time Stan was Charlie’s understudy. When the troupe toured the United States, Stan, like Charlie, decided to remain. Stan made his first solo film short in 1917 and proceeded to make fifty shorts after that, mostly with Hal Roach Studios, before he teamed up with Oliver Hardy in 1926. Both men actually appeared in some ten shorts together, but as solo performers, before Hal Roach decided they were the perfect silent film comedy team; one thin, one heavy, playing off each other’s appearances and personalities for laughs. Stan’s screen character was a gentle, well-meaning fellow, who genuinely wanted to help out his buddy Oliver Hardy, but whose efforts often failed, producing exactly the opposite reaction in Hardy than he had anticipated. Over the next few years Laurel and Hardy were turning out one short feature a month, perfecting their craft. Both men truly liked each other, which also made their team so special on screen. While the team worked with a number of directors it was always acknowledged that Stan Laurel was the real creative force behind the films. When the sound era arrived, the team of Laurel and Hardy went right on going, since their comedy was not so much based on slapstick, but on their personal relationship with one another, and they found their greatest success together, filming wonderful classics such as the short “The Music Box” (1932), and the feature “Babes In Toyland” (1934), the team’s own favorite film. During the late 1930’s Stan Laurel broke with Hal Roach and tried to go solo, but was not successful. He was re-teamed with Oliver Hardy in the 1940’s but their sweet, innocent brand of gentle humor had lost favor with the movie going public; in addition they had lost creative control over their films. Laurel and Hardy began to be re-appreciated in the 1950’s with the advent of television. Their old films were played quite often; many had entered the public domain and the television stations did not have to pay royalty fees to broadcast them. Hal Roach tried to reunite the film team in the 1950’s but their ages and ill health prevented the reunion. Stan Laurel was married five times and divorced four times, twice to the same woman. He had two children with his first wife Lois Neilson. Neither Stan nor Oliver Hardy ever became wealthy because they did not own their film properties, neither did they receive a percentage of the profits. Stan died from heart failure on February 23rd, 1965, but not before receiving a special Academy Award in 1960 “for his creative pioneering in the field of cinema comedy.” ~ Copyright © 2004 www.goldensilents.com 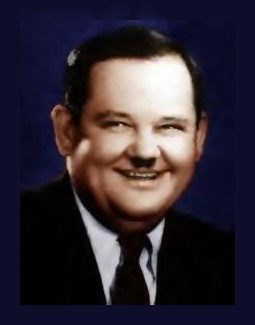 “The world has lost a comic genius. I have lost my best friend.” – Stan Laurel’s Eulogy for Oliver Hardy, 1957

Oliver Hardy was born Oliver Norvell Hardy on January 18th, 1892 in Harlem, Georgia to a non show business family. The family moved to Florida when he was a child. As a lad he showed a talent for singing and by the age of eight he was performing with minstrel shows. His parents wanted Oliver (nicknamed “Babe”) to be a lawyer but he decided to run a movie theater instead. Oliver tried to break into films when the film company Lubin arrived in Florida, and the company hired him as a comedy actor due to his large girth and expressive facial features. Oliver’s debut film was 1913’s “Outwitting Dad”. During 1914-15 he was in the “Pokes and Jabbs” series of comedy shorts; 1916-18 saw him in the “Plump and Runt” series of two reelers; during 1919-21 he was in the “Jimmy Aubrey” series, and from 1921-25 he worked as an actor and co-director of comedy shorts for Larry Semon. In 1917 he had played a bit part in “Lucky Dog”, starring his future partner Stan Laurel. He then went on to make other shorts with Stan before they were teamed officially by Hal Roach. His first two-reeler with Stan was the silent “Forty-Five Minutes from Hollywood” (1926). Their first release through M-G-M was “Sugar Daddies” (1927), and their first with star billing was “From Soup to Nuts” (1928). Their first feature length starring roles began after sound arrived, when they were seen in “Pardon Us” (1931). Oliver Hardy’s screen character was noted for his genteel pomposity, his tie twiddle, and long suffering look while dealing with Stan’s character’s well-meaning but ultimately frustrating actions on screen. Most people today consider the sound shorts the team made in the 1930’s to be some of their best work, for instance the classic “The Music Box” (1932), in which they repeatedly have to lift a piano up a long flight of stairs, and “Busy Bodies” (1933), which saw the team’s car cut in half by a giant band saw. They also perfected the pie throwing scene and had a number of them in their films (it is for this reason director Blake Edwards dedicated his funny 1965 film “The Great Race”, starring Jack Lemmon and Tony Curtis, to Laurel and Hardy). For a brief period in the late 1930’s the comedy team broke up, due to Stan Laurel’s disagreements with Hal Roach, but they were re-teamed again for some minor films in the 1940’s. Their film work fell temporarily out of favor with their public during the war years, but at the advent of television their popularity was renewed due to their old films being broadcast repeatedly on the new medium. Roach tried to reunite the team but Oliver Hardy by this time was in poor health. Hardy was married three times and divorced twice. He died on August 7th, 1957 from the effects of a stroke. ~ Copyright © 2004 www.goldensilents.com 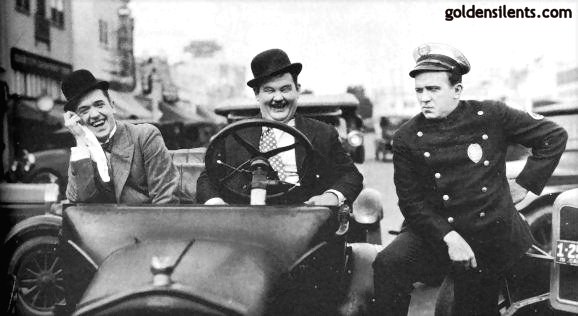