One of the silent screen’s most popular comedians, Harold Lloyd was born Harold Clayton Lloyd in Burchard, Nebraska, on April 20th, 1893. His parents separated when Harold was young, and he eventually went to live with his father. Harold was a bright, imaginative boy, and yearned to be an actor from a young age. He was educated in Omaha, Denver, and received theater training at the School of Dramatic Arts in San Diego. He appeared for a time with the Omaha Stock Company.

While in San Diego the Lloyds discovered that the Edison film company was looking for extras, and Harold applied for a job, getting his start in films dressed as indian in 1913’s “The Old Monk’s Tale.” Harold went on to make over 200 comedy shorts for studios such as Universal and Keystone. He became friends with Hal Roach, who also started in films as a bit player, and when Roach inherited money the two friends began their own studio named Rolin, making their own pictures, with Harold as the star performer. Harold created a character called “Lonesome Luke” which was popular with the public, but after playing Luke for several years he began to feel his screen character needed a change of direction. In 1917 Harold created a new character called the Glasses character. This character was far more defined than the Luke character and employed more difficult, dare-devil stunts; he was an energetic, positive and clever young man who usually fought against great odds and circumstances to win the girl of his heart, which in his early years was most often Bebe Daniels or Mildred Davis, Harold’s future wife. This Glasses character resonated with the public, and soon Harold Lloyd’s films were eagerly anticipated and attended by audiences everywhere.

Harold Lloyd’s most creative and successful period came between 1919 and 1928 with films such as “From Hand To Mouth” (1919), “An Eastern Westerner” (1920), and his first features “A Sailor-Made Man” (1921) and “Grandma’s Boy” (1922), in addition to his classics “Why Worry?” (1923), his first film co-starring lovely leading lady Jobyna Ralston, “Safety Last!” (1923), “Girl Shy” (1924), “The Freshman” (1925), and “The Kid Brother” (1927). In 1920 a freak accident with a supposed prop bomb which turned out to be real caused Harold Lloyd to lose the thumb and forefinger on his right hand. Shaken, at first Harold wondered whether he could continue as an actor. However where there is a will there is a way, and Harold had a prosthetic device created, and wore a flesh-colored glove in his future films to mask the crippled hand from his audiences. Harold married his leading lady Mildred Davis in 1923 and Mildred gave up her career as an actress to raise a family; the couple had three children, a daughter Gloria, an adopted daughter Peggy, and a son Harold Lloyd Jr. Harold built a fabulous home for Mildred and the children called Greenacres, which was one of the showplace homes of early Hollywood. Harold Lloyd’s personal, family and professional life was far more stable than his main competitors’, Charles Chaplin and Buster Keaton. He had left Hal Roach in 1923 on good terms and had formed his own company called The Harold Lloyd Corporation; he was one of the few stars who actually owned his most successful film properties. In 1928 Harold published his own autobiography entitled An American Comedy.” When the sound era arrived Harold continued to make interesting comedies such as “Movie Crazy” (1932) and “The Milky Way” (1936), but his film career was winding down as he aged and as the public’s tastes in films changed. Harold continued to be involved with the industry off screen as a producer, writer and director, and he enjoyed experimenting with different hobbies and businesses, including 3-D color photography. He briefly reappeared as an actor in one last film made in 1947 and retitled “Mad Wednesday” (released 1950). In 1962 Harold made a documentary film called “Harold Lloyd’s World of Comedy” which created new interest in his work. He enjoyed touring on college campuses during the 1960’s, showing his 1920’s silent classics to a new generation of film fans. In 1969 his beloved wife Mildred died from a heart attack, and Harold died two years later from prostate cancer, on March 8th, 1971 in Beverly Hills, California. Only three months later his son Harold Lloyd Jr., who had been an actor himself, died from the effects of a massive stroke. Today the Harold Lloyd Trust continues restoration of Harold’s films, introducing these comedy gems to new audiences. ~ Copyright © 2004 www.goldensilents.com

To download a vintage biography of Harold Lloyd from 1924’s “Blue Book Of The Screen”, please click HERE (267 kb) 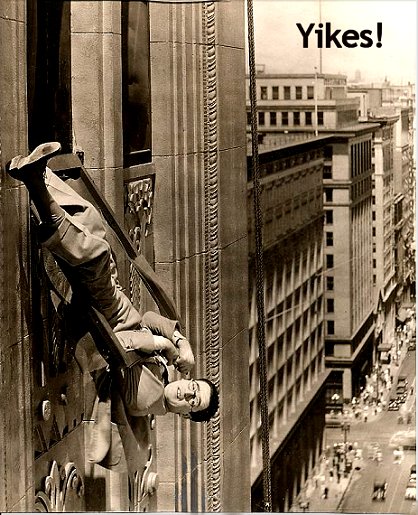