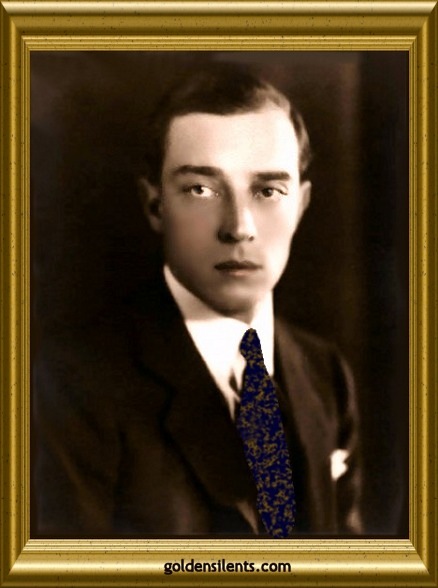 Silent film star Buster Keaton was born Joseph Frank Keaton the Sixth in Piqua, Kansas to a traveling show business couple, Joseph and Myra Keaton. Later when their toddler son joined his parents on stage they began to call themselves The Three Keatons. It was Harry Houdini, a friend of the family, who also appeared on tour with them, who came up with Joseph Jr.’s nickname “Buster.” When he was about six months old Joe Jr. fell down a flight of stairs, a little stunned but with no bruises or bumps, and the impressed Houdini declared: “What a buster!” The name stuck. The Keaton family graduated from traveling medicine shows to vaudeville, and by the time Buster was a young man in his teens he was already a vaudeville star, an expert acrobat and stage comedian. He abandoned vaudeville for films when the popular silent star comedian Roscoe “Fatty” Arbuckle hired him as an actor to appear in his film “The Butcher Boy” in 1917. Buster was to remain grateful to Fatty the rest of his life for believing in him and giving him his first break in films. The picture was a success (it has recently been recovered, restored, and put on DVD) and Buster’s silent film career was on its way.

He quickly decided that he needed a unique screen persona all his own, separate from Fatty, Harold Lloyd, Charles Chaplin or any other film comedian. The screen character he came up with was in some ways a continuation of his stage persona, only more exaggerated: a handsome, dignified, and resourceful young man whose deadpan “stone face” depicted emotion with stunning and brilliant subtlety. Buster was lithe and extremely athletic at five feet, six inches tall, weighing only 140 pounds. He moved with the smoothness of a dancer but in a whirlwind style, whether he was caught in the clutches of a machine, running against a rain storm, or dogged by screen enemies. Buster was also eclectic: one never knew exactly what to expect from his next film project, which of course kept his audiences guessing and coming back to the theater again and again. He was a persistent bridegroom trying to put together a portable home in “One Week” (1920); he became multiple personalities in the dreamy, surrealistic “The Playhouse” (1921); he was a dark, almost fatalistic father in “The Boat” (1921); a lovesick movie projectionist who dreams he has joined the action in a film he is playing for an audience in “Sherlock Jr.” (1924); an ambitious businessman who risks life and limb against a parade of crazy women in order to inherit seven million dollars in “Seven Chances” (1925); a stoical train engineer during the Civil War in “The General” (1927); an effete, long absent son who is restored to his seaman father, and who has the front of a house fall on him, in “Steamboat Bill, Jr.” (1928); and an irresistibly sweet tintype cameraman, who longs to become a successful newsreel photographer for M-G-M to impress the beautiful Marceline Day in “The Cameraman” (1928 – my own favorite Buster Keaton film).

Buster Keaton was married three times. His first marriage took place in 1921 to Natalie Talmadge, sister of silent film stars Norma Talmadge and Connie Talmadge. Buster and Natalie had two sons, but the marriage ended in divorce in 1932. He then had a short marriage of only three years to Mae Scriven, followed by his happiest marriage, to Eleanor Norris, which lasted from 1940 to 1966, the year of his death. It was after Buster gave up his own studio and his ties to producer Joseph Schenck, and signed a contract with M-G-M in 1928, that his personal and professional troubles slowly became more exacerbated. He lost much of the artistic control of his films, and while his last two silent films were still well made and successful, his early talkie films generally were not. His marriage was on the rocks and he turned to drink for comfort. For years he was a neglected artist, appearing in B pictures, working in educational films, barely surviving as either an actor, assistant director, or gag writer. However, due to his television appearances in series and commercials in the 1950’s, plus a series of live appearances in Paris, France, in addition to the restoration and revival of some of his silent classics, his professional reputation as a screen artist was eventually fully restored. A Hollywood style biography of his life, “The Buster Keaton Story”, was filmed in 1957, with actor Donald O’Connor playing Buster. Buster won a special Academy Award in 1959 “for his unique talents which brought immortal comedies to the screen”, and in 1965 he received a tremendous ovation at the Venice Film Festival. A ghostwritten autobiography of Buster Keaton, entitled “My Wonderful World Of Slapstick”, was published in 1960. A biography entitled “Keaton”, written by Rudi Blesh and published in 1971, presented a far more complete picture of the silent film genius. Buster’s last screen appearance was as “Erronius” in “A Funny Thing Happened on the Way to the Forum” in 1966. He died from lung cancer on February 1st, 1966 in Los Angeles, California. Today almost all his films are available on VHS or DVD and have found new, appreciative audiences around the world. ~ Copyright © 2004 www.goldensilents.com

Vintage Bio from “Who’s Who On The Screen” (1920): “Joseph Francis, better known as Buster Keaton, will be remembered by vaudeville enthusiasts as the third member of The Three Keatons. For years his father coached him until he became a marvel, even as a youngster, in the rough and tumble act the family presented. In 1917 Roscoe Arbuckle gave young Keaton his chance for a screen career and he made good at once. He has since appeared as Bertie “the lamb” in the Metro picturization of Winchell Smith’s and Victor Mapes’ play “The New Henrietta” which Metro produced under the name of “The Saphead.” Buster is to follow this high comedy characterization with a series of two reel comedies known as “Buster Keaton Comedies” and which Metro will distribute. He is five feet six inches high and weighs a hundred and thirty-nine pounds.” 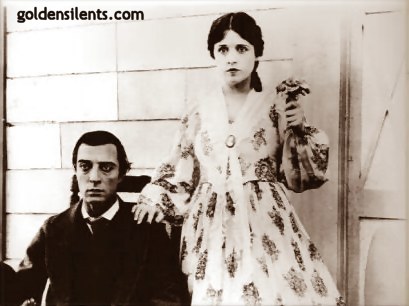 Buster Keaton and Marion Mack in “The General” (1927), one of Buster’s most popular silent films 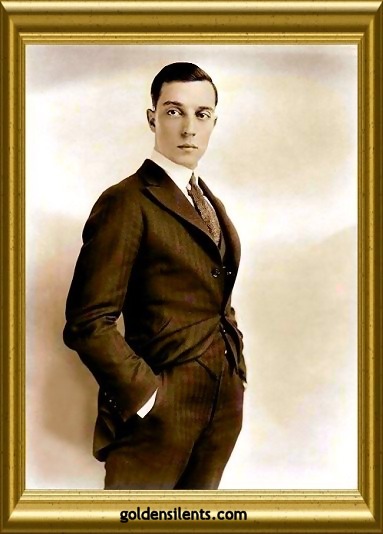 The one, the only, Buster Keaton